I recently watched a Real Housewives reunion, where one housewife nastily said to another housewife: “You’re an opportunist!”

Bravo executive and reunion host, Andy Cohen practically jumped out of his seat. “What’s wrong with being an opportunist?” He asked to a roomful of screaming ladies. They ignored him and continued to scream at one another.

“WAIT. What’s wrong with being an opportunist?!”

Bravo Andy shouted it a second time. Silence fell across the couches; nobody knew the answer, so they moved on to the next subject. But, I couldn’t move on.

I love! Love! LOVE! Opportunity. I’m obsessed with unlimited potential and infinite possibilities. I love seeing where new paths may lead. Who doesn’t want to open and explore all the doors that surround them?

From the Free Dictionary, an opportunist is “one who takes advantage of opportunity to achieve an end, often with no regard for principles or consequences.” What I’m wondering is, who put the negative spin on the end of that definition? Here’s what I want to know: 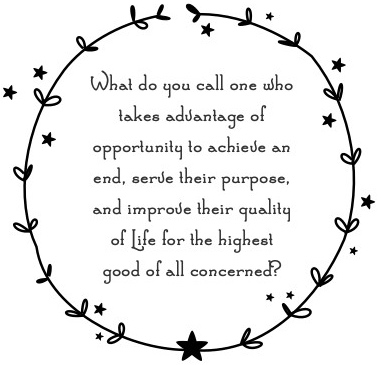 When you try to advance in business, there comes a point and time when you must question your own limiting beliefs about success and money. There are silly ideas in the way, such as the definition to the word “opportunist”, that say if you go for what you want then you’re not a person who cares about principles or consequences.

Do you know who makes up those words?

The people who never had the courage to chase their own dreams.

They want you to feel bad for earning what they wish they had. They want you to feel over-ambitious for doing what they wish they’d done. They’re the only kind of people who won’t believe in you. And guess what? Their opinion doesn’t matter. I have a rule in my life: Unless a person is actively working toward their dreams and living a Life overflowing with passion and purpose, then I don’t care what they think, and their advice is unsolicited.

I made that rule about two years ago when I went out on my own and carved a path that nobody I knew had ever walked before. For a short while, I walked it alone. But ever since I set those boundaries, I’ve attracted more and more people into my Life who …

Actively work toward their dreams and lead a Life overflowing with passion and purpose.

I’m going to unapologetically seize opportunity in 2013. I’m going with my gut. I’m taking every possibility into consideration. I will continue to build my business on a foundation of love and intention, and every decision I make will represent my best effort to serve the highest good of all concerned.

I choose to leave my fears behind. My plan is going to flow like a river, around obstacles and according to the lay of the land. I’m going to blow the roof off this place.

Won’t you join me?

New You for a New Year: 7-Days of Reflection and Resolution starts here on December 27