Do you mind if we talk real dollars and cents this year? Before I tell you how I earned $18,195.68 last month (working from home, running my online business), I want you to know that I grew up with a very modest idea of money. My history is so modest, in fact, that I’ve had to overcome major mental blocks before I could trust the value in my own offer, price my work to reflect my experience, and earn more money as a result.

And what I’ve learned since then is what a very subjective topic money can be. I don’t know if you think $40,000 is a lot of money or a little bit, but trust me when I tell you that – even a year ago – I could not fathom that glorious amount of money spilling into my life in a single month (and it has topped that a few times). After all, I spent years desperately grappling to make 40K as an annual salary from my online business.

This year, I’m going to drop real numbers in your lap.

If you want to compare anything, compare where you’re at now to these income reports I shared back in 2014. That’s the year I felt stalled and unsure, and the struggle was real. Making tens of thousands of dollars a month is surreal, and the funniest part …

Everyone wants my business today! The vision is alive, and so they believe!

Nobody wanted my business in years 1-4 when I worked just as hard, scraping by, frustrated and ready to quit, but I refused to quit because I BELIEVED and my HUSBAND and CHILDREN BELIEVED in my calling and my message and my purpose. 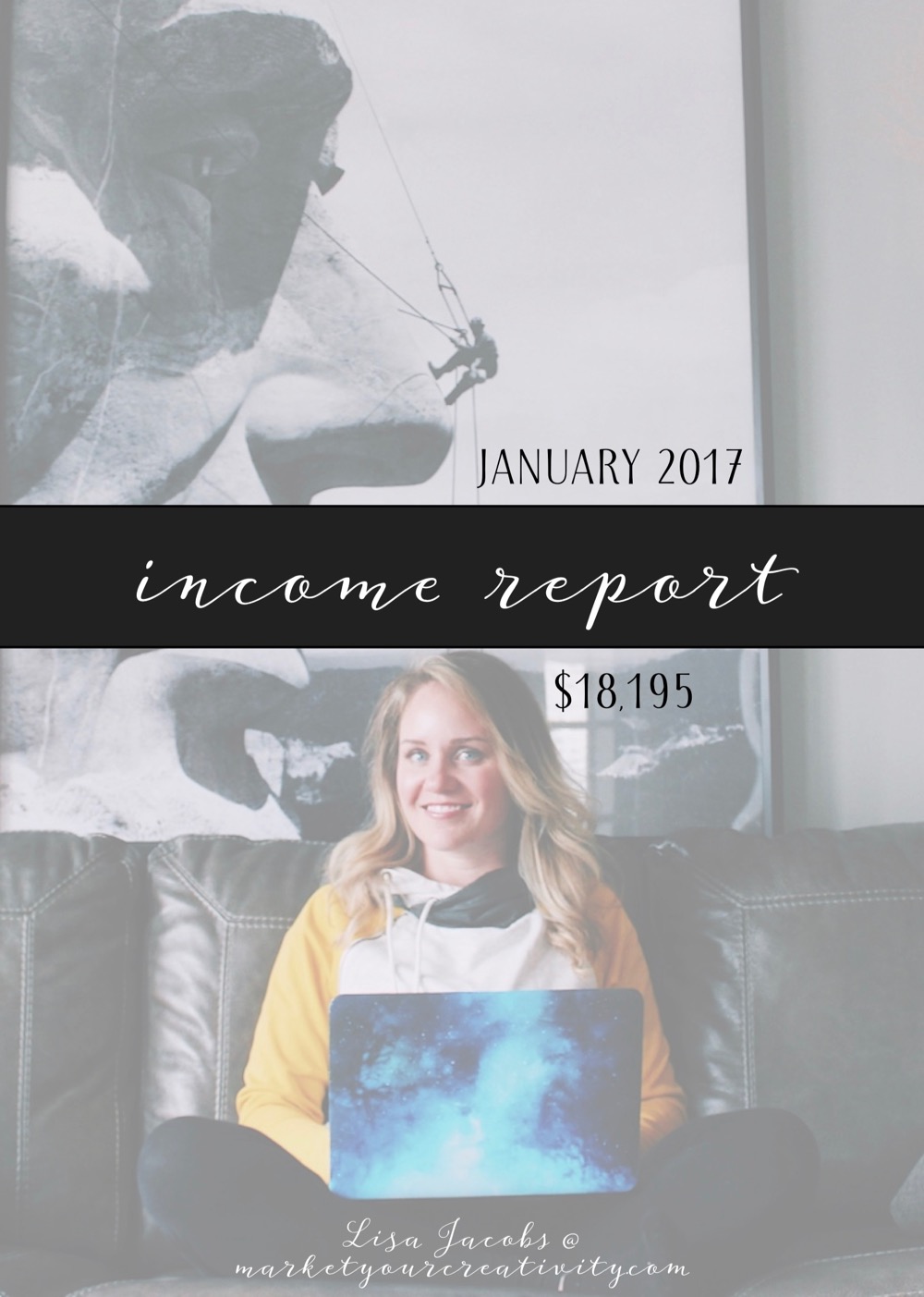 Back in 2014, my income reports were my own private experiment in persistence that just happened to be publicly shared.  The truth was, I was tired of the uncertainty and ready to quit.

What a scary thought that is to me now! What if I’d quit? Because don’t get it twisted, it’s been very tempting at times! What if I’d tucked my tail between my legs, left this blog because “it’ll never work”, and started all over in a more traditional career? What if I’d never created The Luminaries Club (my online group coaching program), written Your Best Year, or instructed on CreativeLive? What if I hadn’t pushed through the frustration to tap into my full potential?

How much of MYSELF would I have missed out on?

That’s a much scarier alternative to taking any of the risks I’ve taken or doing any of the hard work I’ve done. Even back then, I had a sneaking suspicion that I was *thisclose* to a profit breakthrough. Of course, I couldn’t be sure. Can we ever be sure in online business? I was rounding year four in 2014, and I’d read something by James Altucher that resonated:

“Here’s a description of the [first] five years:

During the first year of income reports, I learned one thing for sure: I knew how to make a specific annual salary ($28K), and I knew how to make it well. I’d been making the same amount for four years. Nothing more, nothing less. Sure enough, I started making good money in year five, and even though it had been a long and persistent build, that money seemed to come very suddenly.

I stopped sharing reports in 2015, and the next thing you knew: I announced my journey to six-figures and revealed the strategy behind one of my 40K launches (2016). And in those posts, I explained the changes I’d made to earn more income, but there haven’t been any breakdown reports to see exactly what makes money and why. I’m committed to sharing these income reports to show you just how well persistence pays off.

In the first section of my income reports, I’m going to talk about the income goal I set for the month and why. Then, I’ll discuss why I missed, achieved, or exceeded that mark. I set income goals for myself at the start of every month, and in many cases I hit them (or come very close). I also make a habit of setting monthly rewards for myself, and I track my abundance daily.

Further reading: 6 Things I Do Everyday to Grow Online

My goal for January was high because I’m smack dab in the middle of Your Best Year season (it runs October-March), and I was scheduled to re-launch my signature program, Complete Copywriting: The Course to More Sales.  I’ll tell you more about what I did to promote both below.

I missed my mark (earning $18K of my $50K goal) because I rolled out Complete Copywriting later in the month than I originally anticipated. The majority of sign-ups came the first week of February.

Complete Copywriting re-opened for sales on Monday, January 30 – I’m quite pleased it was a top-earner as it was only open for two days when the month closed. To promote the course, I held one webinar on January 30 titled, Complete Copywriting Secrets of a 6-Figure Business. I only shared the opportunity to register for that webinar with my email list, and we had a full house long before it went live on air.

Everyone who registered for the webinar got the replay, and 18% of viewers signed up.

Your Best Year 2017 earned a combined total of $8,470.72 in January. Amazon royalties earned are actually from December sales, and they outsold my January direct sales. That’s uncommon for this edition; in most cases I outsell Amazon by at least 4:1.

I’ve had very few wins in advertising with Your Best Year this year, and that’s true to form. Online advertising is fickle, and the tide turns quickly. Last year, I had amazing success with Facebook ads. This year the same campaign fell flat on its face. I’ve made several efforts in paid advertising this season, but organic word-of-mouth outperformed everything else.

This year’s edition was jam-packed with effective strategies and techniques, so as a form of promotion, I’ve very much enjoyed sampling out a few portions of what is has to offer. These also help to sell the book. Some examples are …

The Luminaries Club is currently closed to new members (with exception to those signing up for Complete Copywriting this month), and the income earned here is from previously sold subscription plans.

I’m happy to hold some extra profit in January. Staff, salary (mine), and contractors will increase dramatically over the next six months. I’ve not only taken on new employees, I also intend to increase my salary in the second quarter.

My web hosting is by Pagely, and my bill is only $24/month (sadly, that amazing price is no longer available to new customers; I love this service). My January expense for this month is high because I’ve included some annual dues that recurred: Calendly and Postcron.

As I stated above, I played with some advertising during Your Best Year season, and the last line was my bill for a Pinterest promotion that I budgeted $750 for in December. I turned the campaign off due to low performance.

I hear a lot of noise right now about not setting goals; big mistake. HUGE! I spend a week in review and reflection every year because, you not only need goals, you need to set your mind right in order to BARREL-ROLL toward them.

This year I’m going to challenge you to acknowledge your strengths, and stop babying your weaknesses. Being subtle about your accomplishments won’t help you showcase them, and avoiding your pain points will only prolong them.

The truth is, most business owners know exactly what they need to do next in order to grow their businesses, but they fail to do so. Whether it’s a rebrand, professional services, virtual assistance, web development, product development, email marketing, or quality lead generation – there’s probably a list of things you KNOW you need to do to get to the next level … you’re just not taking the leap.

I’m begging you to stop being prisoner to miserable things that you can change! Let’s make this the year you shatter your comfort zone to create huge results. That’s why I brought back my income reports + issued YOU the 52 Week Challenge. The 52 week challenge is designed to help you endure, and I’m going to add some healthy competition throughout. Why add competition to it? Because playing this business like a sport, and surrounding yourself with other people who play it well, will increase your motivation for success.

By playing together, we exponentially increase our collective staying power.

The overarching theme: HOW MUCH CAN YOU ACCOMPLISH THIS YEAR?

It’s not about money or sales or numbers, even though you’ll definitely see an increase if you play along. Instead, it’s about completion and follow-through and endurance, and that’s a beautiful thing because those attributes are well within your control.

Here’s how to play along:

Important note: You must be subscribed to my newsletter in order to play along. I will sell my products and services via that same list throughout the year. My sales emails are so informative and valuable that my subscribers thank me for sending them. If you don’t like campaigns and promotions, or if you have some kind of beef with selling in general, we’re not going to be a good fit. Play on, playa!