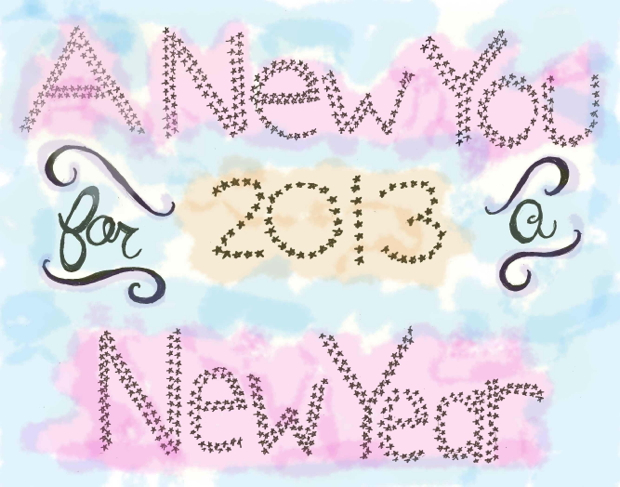 What a wonderful week! I hope you’ve enjoyed this series as much as I’ve enjoyed putting it together. We reflected on and closed 2012, did a loving self-review, received beautiful wisdom from the lovely Leonie Dawson, and named our intentions for the New Year. It’s been a joy, and here’s the links if you missed anything …

If you’re anything like me, you’re starting the first week of the year with (1.) a list of intentions, (2.) a list of goals you’d like to accomplish, and (3.) an energetic inner-restlessness so powerful, it’s practically palpable to the people around you. (I did not put all those P’s there on purpose :D.)

So, I want to close this series with suggestions for softer goal-setting. Your vision for the New Year should make you feel good rather than anxiety-ridden. In the book, Psycho-Cybernetics, A New Way to Get More Living Out of Life

You should use the same technique in all your affairs that Jackie Burke recommends in putting. That is, not to feel that you have to pinpoint the ball right to the cup itself on a long putt, but to aim at an area the size of a washtub. This takes off the strain, relaxes you, enables you to perform better. If it’s good enough for the professionals, it should be good enough for you.

Furthermore, in the book,The Success Principles(TM): How to Get from Where You Are to Where You Want to Be

, Jack Canfield told about the year he wanted to earn $100,000 (up from his current salary of $18,000). He did what positive thinkers do: he made signs affirming his new and abundant salary, he worked all year-through consciously and subconsciously creating more income for himself, and by the end of the year he had earned more than $90,000. Others told him that he hadn’t actually achieved his goal, but he says, “I wasn’t disappointed!”

The point is not to cross every single goal off the list. What matters is that you’re setting the bar higher, and stretching yourself daily. That’s the only way to grow and work toward your dreams.

How will you begin?

During this 7-day series, Leonie Dawson and I had a conversation about getting started with your goals. She said,

I get a page out and for each goal I want to undertake, I say, “What is it I need to do in order to make this goal happen?” Just write a really long list of action steps that will get you from where you are right now to the place that you’ll be when that goal is completed.

Having those little micro-steps along the way is so much easier for you to implement than if you were just taking on a huge goal, like “write a book.” And then start aligning dates to the micro-steps as well. Schedule them into your calendar.

It reminded me of Google Directions, and the joke I often hear about getting directions from your house to another location: “I think I know how to get out of my own neighborhood, can we maybe start from the highway?” But Leonie’s advice is 100% on point. When you’re doing something you’ve never done before, you absolutely need the basic directions … you need to know which way to turn out of your driveway. Those itty-bitty tasks are often what stop your progress or intimidate you from getting started in the first place.

Make a list of even the most basic steps it will take to accomplish your big tasks so that your sense of “not knowing” doesn’t leave you trapped right where you are.

I plan on following through by adopting new habits. For me, this will be the most challenging task. I love an old habit and an outworn pattern. 🙂 But, I’m being called upon to grow, and present myself in a bigger, better light. To do so, I have to increase my productivity and decrease my (somewhat) unconscious self-sabotaging ways. And since I’m my own boss, I want to do this in a kind and gentle manner. I hope to ease into the process of adopting new and improved habits.

I’ve loosely planned out the year in advance. I’ve created a plan that will organize my business to be one that I can count on and trust as a regular income, and I’ve figured out all the steps required to do so. Each month (or quarter for larger projects), I’ll be actively taking steps toward this intention.

There’s a lot of work to be done. Period. It’s time to put my money where my mouth is! I love you so much, and I’m so excited to embark on 2013 with such an amazing group of creative souls. Let’s do this! Until next time and all the best~